You are here: Home / Lifestyle / My Magical First Trip to Walt Disney World
This post may contain affiliate links and/or PR samples.

Did you ever hit the childhood jackpot of going to Disney World as a kid? Growing up, that was just a dream for me. I remember when I was seven years old and Alice in Wonderland was airing on TV, and I literally cried tears of joy. As in, Disney was on our TV. These were the days when Disney was a premium channel and we would never get it. I realized then that it was one of those week-long free previews to entice kids to beg their parents to subscribe to the channel. I will never forget the magic of that week, and I brought it with me to my first trip to Disney World ever…last month.

I had the fortune of spending the days leading up to Memorial Day Weekend at Disney World. Just a few hours’ drive from Jacksonville made it a reasonable getaway for a few days. I use the term ‘reasonable’ as I was lucky enough to join a family member while staying at the Boardwalk Hotel in Epcot for professional training. In other words, I got to stay there for free and only my only expenses were park admission tickets (at a discount!) and meals.

Someone said to me, “I can’t believe this was your first time going to Disney!” To which I replied, “My family was poor,” which is the truth. Sure, at 32, most people have already experienced Walt Disney World and are actually bringing their children to Disney for vacation. That fact hasn’t been lost on me.

But you know what? Magic is magic no matter what your age.

I wasn’t offended by this, but I find the dynamics of how differently people grow up in the same country amazing. Going on vacation to Disney World, something that’s viewed as a tradition for some American families, is actually a stretch of the imagination for most. Especially for those of us who come from immigrant families. The first generation usually has it the hardest, paving the way for subsequent generations to benefit from their sacrifices. I’m proud of my working class roots and, I think, it helps me appreciate these opportunities a little bit more than someone who can comfortably afford it. It don’t take this experience for granted.

I spent most of the trip alone, trying to work the Disney World app on my iPhone to find rides. It was a bit exhausting. This is hyperbole, as I’m sure I walked eight miles each day without a cloud in the sky. I finally understand what FastPasses are, and how nice it is to get on a ride in 15 minutes versus 120 minutes (here’s looking at you, Spaceship Earth). Between my FastPass rides, I tried to take photos of little details that would help me remember my trip.

Since it was my first time at Disney, I assumed that the lines to meet some princesses would be shorter around dinner time. Boy was I wrong! I waited for over an hour in line (I wish people knew the meaning of personal space) in front of kids who kept smacking me in the butt and stepping on my foot. They were annoying, but I kept reminding myself we’ve been in line for over an hour!  Was it worth it? 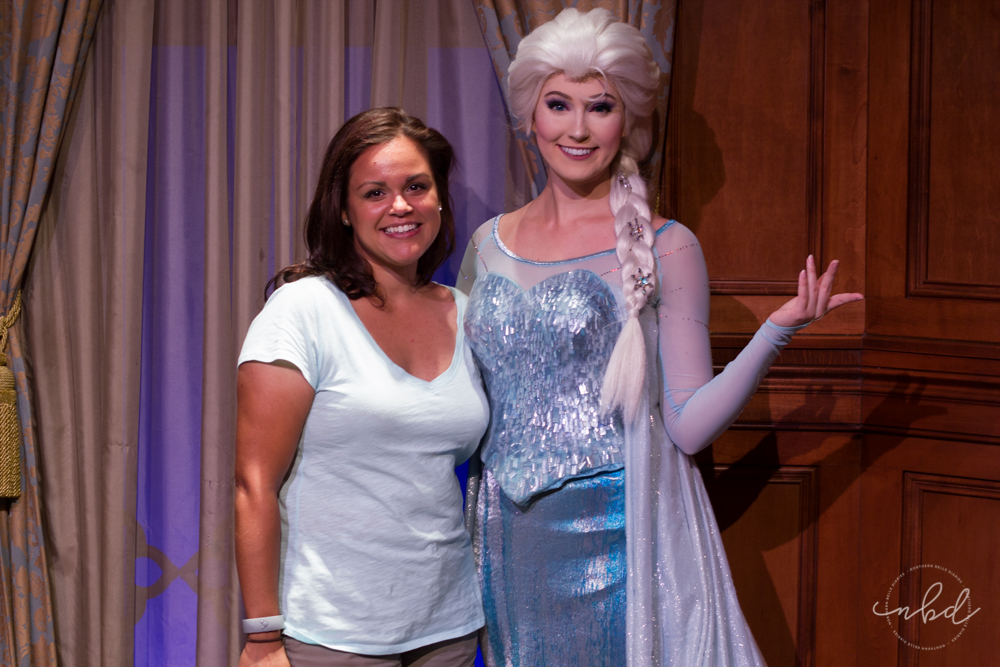 Absolutely. Once I reached Cinderella’s shoe I was whisked away to a private room with none other than Queen Elsa and Princess Anna. Inside, the little kid in me was mesmerized. I LOVE Frozen! I associate more with the badass and misunderstood Queen Elsa, but Princess Anna really stole the show. Before my turn with the royal sisters, a little 3 year old girl clung to Queen Elsa for several minutes, hiding her face in Elsa’s neck. It was adorable, and Elsa just let her do her thing. She did wait over an hour for her turn, after all.

Princess Anna immediately greeted me with a warm hug and held my hand! There was talk of hot chocolate and snow. She also told me Olaf was working on his tan in a different part of the Magic Kingdom. She was so animated and warm that I see why she’s a favorite with the kids.

I almost didn’t include the picture above, because the low lighting made it hard for the Disney crew to take a clear picture, but it so perfectly captured my experience with Anna that I couldn’t leave it out. Can you feel the warmth of her personality? This alone made it worth the hour plus wait. I didn’t care if anyone thought it odd that this woman was out taking pictures with Disney characters all by herself. It was magical!

During my four-day stay, I opted to go to Magic Kingdom twice using my all-day passes instead of going to Animal Kingdom. Did I make a mistake? I don’t know, but there’s plenty of time for me to experience Disney as a Florida resident! On our last day, my second time at Magic Kingdom, Tammy was able to join me for most of the day!

Tammy surprised me with a dessert party our last night there, and while the pictures were too blurry to post here, trust me–they were delicious! The Wishes Fireworks Dessert Party at the Tomorrowland Terrace Restaurant literally has the best seat in the house for the fireworks and Illuminations show in Magic Kingdom. I snapped a few pictures of Illuminations on Cinderella’s castle (one before and one during shown below) but I enjoyed the fireworks without snapping pictures.

Even Tinkerbell made a grand entrance! She flew straight from the castle and right over our heads. It was an amazing and moving show, and well worth the crowds to experience. This post only contained photos from my time at Magic Kingdom. I will share a bit more about my Disney experience in other posts!

Have you been to Disney? What age were you the first time you went?

Disney’s Star Wars Half Marathon: The Dark Side